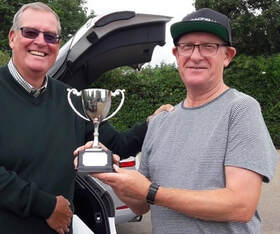 This year saw the competition for the John Clifton Memorial Cup held for the first time.

John was a popular member of the club who sailed regulary at Furzton Lake who died earlier this year.  He sailed well after his 100th birthday and we believe he was the oldest active radio sailor in the UK.

The runnerway winner was Dorian Crease seen in the photo (on the right) accepting the trophy.  Dorian won all three events.