TIRYC Tot
A short series of four (which became 6 )races 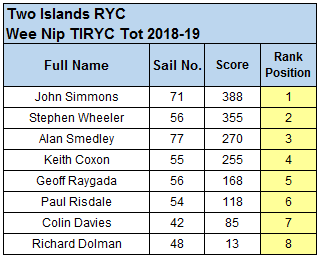 Here are the results for the final round of the Wee Nip series for the TIRYC TOT trophy for 2019.

Just four boats our today, all in contention for the trophy given the forecast - true of rain and wind gusts of 40 mph plus. So there was some motivation!!

We set a course in the wind shadow of the western bank with a short course but with three laps giving us 12 races over the two hours of competition.

John Simmons set a blistering pace with five consecutive first places but he couldn’t quite keep that pace up for the latter races. Steve Wheeler was always close behind for second place and Alan Smedley also in the running. KC tried so hard to get a win but failed on a few occasions with the flukey wind always deleting his best efforts.

So John home first with 16 points from his brilliant first few races at the start, then Steve with 23 points, Alan with 24 points and KC fourth on 25 points, how close was that?

The Wee Nips were brilliant in the extreme conditions with their designed bounacy keeping them from nose diving on most occasions, it was good fun despite the rain and wind.

The wind was from various directions and mostly gusting but at times swirling around leaving boats becalmed. Extremely difficult conditions.

With no real solid wind direction Alan set and ‘interesting course’ with all points sailed regardless of the course but with a hectic running/reaching start with lots of boats at the first mark together.

Somehow we sorted ourselves out and we managed to get round the course finishing 11 races. John Simmons suffered a couple of issues at the start with a faulty switch and so missed the first four races.

KC had a cracking start with five first places from the first six races but then had a ‘purple patch’ in the remaining races. Steve Wheeler was absolutely consistent with two wins and eight second places. This consistency gave him the win overall with 16 points. This left KC in second place with 17 points and Alan Smedley completing the podium with 29 points.

An interesting day in very tricky conditions. The places for the TIRYC Tot series are listed for Two Islands members.

Thanks to all at Emberton Park SC for hosting the racing, we hope to continue this race exchange programme between EP and Two Islands next year.

Forgive the pun but there was definately a Nip in the air ! The Northerly breeze certainly made for a chilly start to the morning for the select band of five skippers. Despite the small turnout, we had a good challenging morning with some very close finishes with some races being decided in the last few inches.
Today's wind direction dictated that we sailed from our normal sailing area, rather than the spit, which has been the control area of choice recently.
The wind direction was a bit of a mixed blessing, firstly it was blowing almost directly on shore, so was relatively clean, although the right hand island did cause a spot of interference around the windward mark and whilst it wasn't particularly breezy there was quite a chop on the water.
Initially we started in the bay, sailing out into the lake, turning back to white 4, back to red 7, repeating for a second lap, finishing on a reach to the jetty.
After a couple of races, the wind swung round so that there was no true beat and it became a bit of follow me leader affair, so we reverted to the more conventional white 2 /4 start, out to white 5 , spreader red 2 , then into doom bay, using red and white 1's as a gate and a second lap omitting the spreader. slight variations were used throughout the morning to eliminate as far as possible the bias of the line and to give a better beat to the windward mark.
You couldn't miss today's winner, Steve Wheeler's fluorescent pink boat showed us the way round , more often than not, although not on every occasion. As usual it didn't take John Simmonds very long to get into gear and was  nearly always in the front of the fleet whilst Alan Smedley still managed a third place, despite loosing power before the last race, fortunately the wind bringing his boat to shore, with only a little nudge from Paul's boat.

Today was probably one of the best days of the year, certainly for sailing, we had wall to wall sunshine and a half decent north easterly breeze which remained fairly constant throughout the day, varying only a little in strength and gradually swinging slightly more easterly as we progressed through the races, which necessitated changing the upwind mark a couple of times to keep a fair beat, which we did very well since there was always a challenge to make the best of the conditions. Courses were simply upwind / downwind with no spreaders. out from the start eastwards, firstly to red 3, back to the middle white start mark, back to red 3, followed by a long run into the bay to round red 1 , finishing with beat or close reach to the line.

The line bias shifted race to race as the wind veered slightly side to side but this gave an overall fair start and as the wind moved round after lunch we brought the beat more into the middle of the lake.
As always at Two Islands there were patches of wind shadow to avoid and there were definite patches of stronger wind but sometimes a beat up the centre of the lake paid , other times hugging the shore paid. Funnily enough, the top skippers seemed to pick the right one each time but sadly some of us mere mortals didn't, in fact some of us seemed doomed to pick the wrong way every time.

Numbers were a bit down today, mainly due to the Easter holidays with many regular skippers either on holiday or with relatives, still the seven of us had some very enjoyable and competitive racing, whilst soaking up the rays, which makes a nice change from transmitter mitts ,wooly hats and thermals.

John Burgoine was utterly dominant today, discarding two second places to give a perfect 11 points from 11 qualifying races. John Simmonds, not quite as consistent as usual and probably lacking a bit of practice still managed to sail well enough to push Peter Shepherd into third place, who was forced to retire from one of the races with a dead battery.
Stephen Wheeler again sailed very well but unfortunately suffered with a burned out sail servo, again missing a couple of finishes, whilst he carried out repairs, which no doubt didn't help his overall score.