20 events for IOM November to April

We have a short report of happenings on February 9th

Very short report today.  Three of arrived and took to the water with our C rigged I0Ms.

Sadly, Rob's time on the water was very limited as his back stay parted so he retrieved the boat, stuck it in the back of his car and watched Dorian and me 'practising' with the occasional visit to the bank for a 'tweak'.

Doom bay was its usual self while the wind patterns down to the leeward marks around white 6 were pretty normal, just a bit stronger than usual: the peak we measured was 38.4 mph.  At around 10:30 the rain arrived and we decided to wrap up before we got too soaked.  (Wimps)
IOM TIRYC Cup Round 11 Results

Just 7 IOM’s sailed today, a bit down on our normal fleet size. The wind forecast was for 22mph gusting to 36mph. So…a few turned up with B Suits but when at the lake it was apparent that the forecast was wrong!

So those that had A Suits with them changed. Alan and Richard believed the forecast and only had B suit available.

The wind was a usual SW so as usual we started from White 3 and 4 up to Red 1 with a run down to White 8 out to Red 5 as a spreader and a really challenging beat back to White one and repeat without the spreader.

Again as usual the first mark was difficult. The wind shifts were plenty and unpredictable often leaving boats to leeward of the mark requiring a nervous port tack meeting those boats who started more to windward on starboard. Often it was the make or break for the race if you had a clean approach.

Having said that the racing was extremely close with the leading four boats often finishing within a boats length or less together. It was a fun day for the A suited boats with really competitive racing.

Dorian got the starts better than most and sailed very well to come home first with 16 points. He had 5 firsts which certainly helped. Mike Kemp was just 4 points back and was pleased with a second place on 20 points. KC was lucky (his thoughts) to finish third on 25 points. Too many mistakes, misjudgements and hitting of buoys. You see why I say lucky!

Rob was just a couple of points behind Keith. The B suit boys did struggle but manfully stuck it out.

However it was a very good morning with a NNW breeze that gave a good beat from Red 6 and the jetty up to Red 2 down to a spreader White 3 into the right hand bay to Red 7 and repeat without the spreader. The wind was quite consistent in strength but varied in direction a bit giving a real challenge to get the beat right. No one boat dominated with four skippers having first and second places. As usual consistent top three scores counted. We lost KC and Dave Green in one race as they tangled and took some time to release. Mike Ewart had a winch line problem but as often with Mike he rebuilt it losing just two races.


Just 6 boats out today. The wind was very blustery from a SW direction meaning a start into Doom Bay with a run down to a white buoy just off of the eastern island back to white 4 and repeat (later repeated twice as we were rattling through the races given the wind strength)

Rob and Richard were on A rig (Rob changed down at Race 7) and the rest of us were on B rig. It was a toss up as to which was right. Doom Bay at the start favoured the A rig but the run down to the islands then favoured the B Rig with the A skippers nose diving at times, a 50/50 decision

The star of the day was Dorian who made some very good starts  and can home first with just 14 points. Next was Richard A Rig on 25 points from KC on 26 points and Rob on 27 points so close but he missed a couple of race results

Good to see Peter Ion out with his new boat and a first time on B Rig, still getting to know the boat

Round 8 of the TIRYC Cup saw eight skippers turn up to enjoy a very nice sailing day. Although the wind was SW/W we decided not to attempt the spit as it is still very wet over there.

We started  between Red 6 and the Bag on the Jetty – into Doom bay to Red 1 – a long run across the lake to White 7 – a Beat back to White 4 – back to White 7 – with a beat to finish between White 3 and White 4.  All marks left to Port. There where some interesting shifts and for some (Richard) a different approach to White 4. Richard had crept inshore were the wind gods treated him to a wonderful lift all the way to the windward  mark leaving the rest of us in awe of his skill.

Report and results courtesy of Rob

On a very pleasant but cold morning Five IOM sailors turned up to enjoy a fair wind mainly from the west.
We started from between Red 7 and the jetty into doom bay (it had it’s moments) Red 1 White 1 all Marks to Port then a run to Red 7 a broad reach to White 7 then a beat back into doom bay to White and Red 1 then a long run to White 7 then the beat again and finish between White 3 and 4.

The beat was to say the least; tricky, the western island playing a huge part in choosing the right approach – the decision to hold onto port then tack to starboard hoping to make the line or the bay dependant on which leg we were on – no matter how much of a lead you had at White 7 you could easily lose it on that beat.

Dorian had a very good day; but once or twice everything twitched, as he approached the finish with no wind and the fleet storming in with plenty.

All in all a very pleasant day – Peter Ion joined us without his new boat but looking for tips/advice on tuning we look forward to Peter with a new boat and fresh eyes. 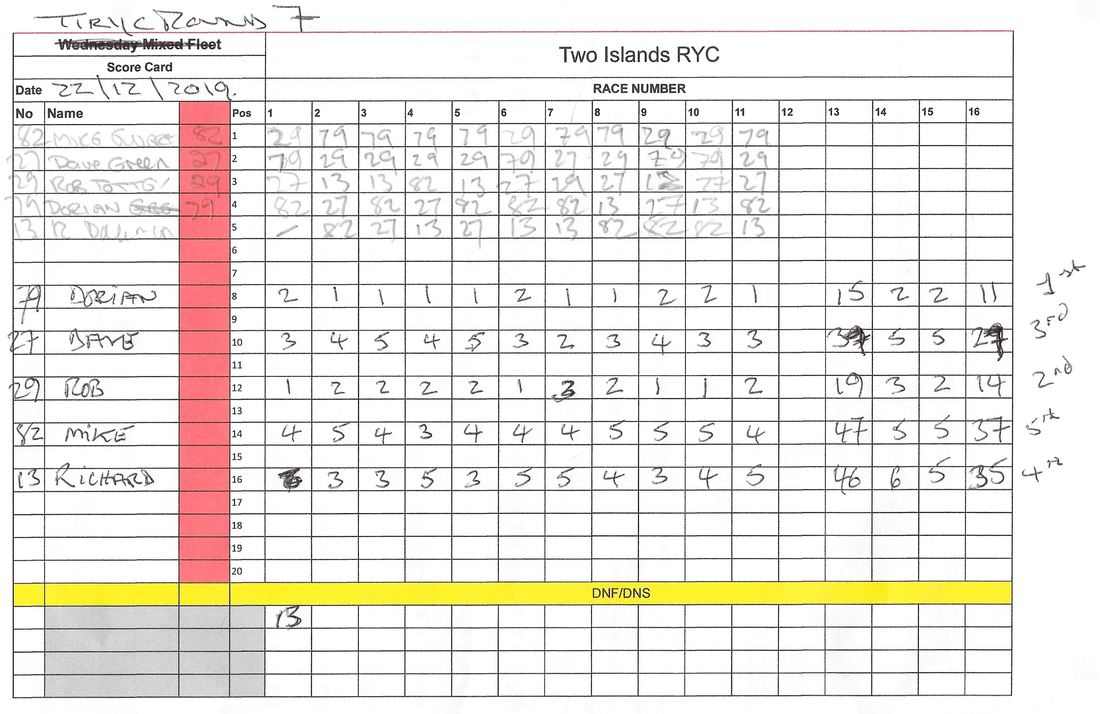 Eight boats out today sailing from the spit with a strong (top of A Rig) SW wind. We sailed the same course as last week, starting from White 7 and 8 with a short but challenging beat to the windward mark White 9 down to the spreader of White 7 out to the perimeter Red 5 then a beat back to White 9 repeated and then a final lap running down to the gate to finish between White 7 and the jetty

The start was as usual important with a short starboard tack at the leeward end, then a flip on a shift onto port seemed to be the best bet. Occasionally a pin end start paid off but not often. The beat from Red 5 was always interesting and was different each lap, sometimes a quick tack onto starboard not far from the buoy paid and at other time a long port tack was best. Sometime both were chosen with places changing or at least winning margins narrowing happened. The leeward mark proved challenging for some (Geoff) as was the windward mark (Keith hitting it on every lap in one race!)

Mike Kemp and Alan Smedley opted for B Rig. First thing in the early morning this was probably the best option but the wind moderated later and A Rig was the best choice although we did have a few ‘moments’ when gusts came through (didn’t we Rob)

So to the results

KC got off to a cracking start with 5 firsts on the bounce with Dorian very close behind. Keith changed strategy at the start at Race 6 and Dorian pounced taking the next 3 races. Rob was always in contention particularly on the windward legs

So…KC first on 8 points, Dorian second on 11 points and Rob third on 20 points. We lost Rob for one race as he hit the bank in a squall and damaged his rudder linkage (soon fixed) and we lost Mike Stevens in the last race when he hooked a buoy and struggled to drift off

All in all a good morning.

The Scribe would like to report that a T shirt, Shirt, Fleece, Heated Vest, the New Everest Base Camp padded jacked and a waterproof worked well, he was warm. In fact some commented that they saw mosquitoes flying around Keith’s head attracted by the heat!

With a WSW wind we opted to have a go at sailing from the spit with the newly laid chippings helping with the muddy conditions. It did help and we restricted the walking around and stayed on the chippings

When we arrived most boats had their B suit on but initially the wind was a bit quieter than forecast. The early arrivals were contemplating changing up to A suit!. Indeed Dave Green and Steve Wheeler started on A suit -more of that later

We started from the two whites 7 and 8 off of the spit initially up to Red 6 (later stretched to White 9 with White 7 being used as a spreader out to the very far Red 5 and repeat without the spreader, a triangle and sausage. A finish line was constructed using Red 6 and the safety bag

After 4 or 5 races we changed to a course of two triangles and a sausage, three laps as we were getting through the races at a fast pace given the strength of the wind

With the wind increasing in strength - as forecast, Mike Ewart had a failure with a split masthead allowing the backstay to ‘fall out’ Mike lost a couple of races but in his usual style using cable ties and probably some gaffer tape he effected a lakeside repair and was back in the hunt. Steve lost radio but thankfully his boat sailed itself back to our bank side and he changed down to B rig and carried on losing a few races. Dave Green similarly opted to change down also losing a couple of races. It was fast and furious!!

Now to the results. KC had a good day making good starts and finished first on 10 points. It was a changing situation on each start sometimes a starboard tack was the best option and sometimes a port hand tack. Rob despite some frustration at the windward mark came in second on 19 points and Mike Ewart despite losing two races finished a creditable third on 29 points

The IOM is a very good boat and sometimes is at its best on B Rig in a strong breeze, exciting stuff

The wind direction was from a great direction NE and of a good strength. This gave us a beat straight up the lake to a perimeter buoy off of the eastern island Red 4 with a spreader (sort of) of Red 3 down to the gate and repeat without the spreader. The start was a bit port biassed which made the starts tricky and if you made a good get away that really paid dividends. John Howell was in great from making great starts and as such he dominated the day with a very skilled set of results at just 9 points. Dorian played a good second place skipper to finish on 16 points with KC third on 26 points after hitting most buoys and some boats - needs to concentrate more!

The racing at the front end is getting tighter and tighter with some good performances also from Dave Green, Rob and Richard and Mike Stevens all recording podium places, all good stuff in true racing conditions requiring skill not luck