At last a break from the rain but still plenty of weather this morning although again the forecast was just about spot on, cold and windy. The southwesterly breeze was forecast to increase in strength as the morning progressed and indeed it did, from a borderline A/B rig before the start to a very definite B suite blow by midday.

For once everyone started on the smaller  sails, which proved to be a wise move.

Naturally the direction caused some issues around the Island and the gusty nature of the wind caused the usual tumble drier effect, with some vicious shits and eddies causing lots of involuntary tacking.

We did manage to set a very decent course, starting between white 3/4 up to red 1, nice fast run, more or less under control, to red 5, reaching out to white 6, followed by a hard fought beat to white 1, straight back to to white 6 and another hard beat to finish between white 1/2.

Sailing was fast paced today, meaning that the ten skippers fairy tore through the races this morning, all exciting stuff with a few incidents caused by unexpected squalls.

Sadly Mike Stevens was an early victim of the gremlins, suffering terminal winch problems before the start, which in some ways was a blessing to the rest of us as Mike kindly stayed to do the scoring.

Geoff suffered when a shroud crimp let go but fortunately was able to use the spare boat that he had brought to test out, hence two missed races and two sail numbers, all very confusing but Mike was not phased!

Whilst some struggled with the conditions, Dorian was never out of the first three, except when there was a tangle on the start line, leaving him as todays clear winner, ahead of Mike Kemp and some distance back, third place went to Dave Green.

Not a very promising weather forecast for today, however we still attracted 10 IOM skippers and after some praying to the wind Gods, there was just sufficient to make sailing viable. We erred on the side of caution , setting a simple two lap triangle course, starting between white 3&4, up to the newly positioned white 1 , running to red 6, out to white 5, finally finishing between white 3&4.  It was difficult to get a true beat to the first mark , sometimes you could lay it, but not always.

As usual on drifting days, the wind would suddenly evaporate entirely, usually just as the fleet reached a crucial mark and of course there were the inevitable dead spots which trapped some whilst others sailed by, only inches away, character building , I'm told. The best example was the final race with Geoff well ahead, with only yards to the line when out of nowhere, Dorian caught a breeze at the leeward mark and came steaming through at great speed ( relatively, of course) to take a cheeky win.

Overall, Dave Green was the quickest, today even though he didn't have it all his way, he was always there to capitalise on anybody's bad luck or error of judgement. Dorian, just a little behind also sailed well, as usual, with Alan and Keith, just a couple of points adrift.

Unfortunately Rob could only sail for the first 3 races, Mike Ewart lost radio on race 6 and despite regaining control, decided to retire the boat, for further investigation.

Although the weather wasn't much better than Wednesday, the IOM's handled the drift much better that the DF65's, with a little more momentum, they sailed through the dead patches slightly better.

After Wednesday's working party, moving the buoys around, the general consensus was the they were now  in much better positions, making them easier to judge and giving more freedom to set decent courses. 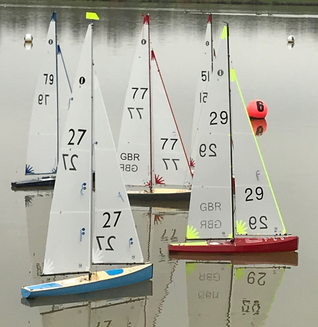 Four, soon to be Five skippers managed to escape the Christmas celebrations for a welcome breath of fresh air and  to escape the relatives.

Sadly the weather could have been better, although it could have been far worse, being cool, damp, dull and almost windless but not totally without , so at 10:00 am it was boats to the water for four of us, soon to be joined by Peter Ion with his new Mad Max.
A simple double triangle course was set, starting between red 6 and the jetty edge, upwind (ish) to red 7,out to white 7, long run to white 4, which we repeated before finishing on the same line as we started.

The light wind swung round throughout the morning such that it was difficult to predict the correct end of the line to start on and sometimes the pin end had no wind, so throughout the morning it was a case of slow, slow quick, quick , low as the wind came and went, which caused a fair bit of bunching up from the back of the fleet.

There was rarely a true beat , so a good start was essential since places were difficult to make places up but easy to loose them by finding a calm patch.

Clearly Dave Green had mastered the conditions, sailing his new Ellipsis, which in the first race lapped the fleet, at first it looked like luck, since he managed to break free from the start and keep the wind, whilst the rest of us floundered but as the morning progressed it began to look more and more impressive, as the results show.

I shall make a mental note to be careful who I build boats for in the future !!!

Almost as impressive was the way Peter sailed his Mad Max for the first time which was as quick as anything else on the pond, despite not being the latest design.

Today we had 11 boats out for Round 1 of the IOM Furzton Trophy series. The wind was lighter than expected and from the SSE the same as last Wednesday. So we used pretty much the same course, start from a distant Red 2 and White 3 beat up to Red 6 just off of the jetty out to White 5 as a spreader with a run down to Red 2 and repeat without the spreader finishing between Red 6 and the Safety Bag.

Actually this turned out to be a decent course with places won or lost on the beat and occasional changes on the run depending upon where the best pressure was. The beat was a real challenge with significant shifts that needed close concentration. Dorian was in good form with top three placings after discards to finish first with 12 points. KC was also consistent but with top four placings to finish second on 17 points. This just pipped Dave Green who made a good start to the session but tailed off very slightly to come home third on 18 points - “Phew!” said Keith. This was only the second outing for Dave with this boat and it is clear he is going to be a serious challenger as he continues to tune and get to know the boat. ‘Pesky' Alan Smedley was fourth close by on 20 points.

We stopped at 12 noon just as the forecast rain arrived after a dry couple of hours whilst we sailed.